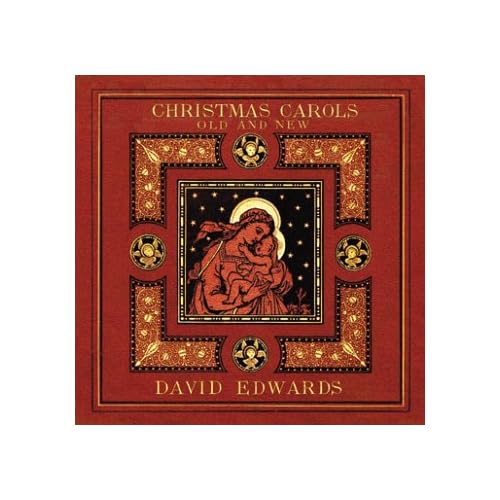 A blessed Christmas season to you all.

During the wintry season of Advent, I often sit by the warm fire in our sun room, with coffee or cocoa in hand, sometimes alone or with family members, and play our many Christmas CD’s on my Bose wave music sytem.

One of my favorites is “Christmas Carols Old and New” arranged and sung by David Edwards. It’s not just that he is an old high school friend from California, I explained to my daughter Rachel this morning, but it’s the fact that Dave’s a really good poet, composer, and musician. He gives the classic songs new resonnance, and his original song on the album–“The World was in His Hands”–is about the striking innocence and vulnerability of the Christ child who was destined to change the world:

“In Bethleham, one winter night,
a child was born by candle light,
and he looked like any other child in his mother’s arms.
Nothing about him told that a mystery would soon unfold.
To see him there, so small and sweet,
with tiny hands and tender feet,
what if you were told this child
would hold the world within his hands?”

When I heard this song again this morning, gazing out through the windows over a white blanket of newly fallen snow, covering the still green grass and trees, I remembered Soren Kierkegaard’s parable of the Prince disguised in beggar’s clothes, covering up his true colors so that “no royal purple shows through.” Behold the mystery of the Incarnation requiring a revelation to the eyes of faith.

The other contemporary song on David’s album is a masterful one entitled “Miriam” by Pierce Pettis. To read and meditate on these inspired words and music during Advent is to be caught up into the spiritual energies of the Theotokas–the mystery of Mary as the Mother of God:

“No banners were unfurled,
when God stepped into the world,
held in the arms of a little girl named Miriam.
Who would ever believe,
the finance, the family,
the teenage pregnancy of Miriam?
But the laws of nature were suspended,
death sentences rescinded,
throughout all the world,
all because of a little girl named Miriam.
Medieval paintings glaring down,
stony figures judge and frown,
wearing a halo like a crown.
Could that be Miriam?
Gentile temples’ stained glass swirls,
cherubim with golden curls.
Oh! How unlike your Hebrew world.
Miriam. I don’t know if you ascended.
I don’t care what’s been amended.
There was one sure miracle: the faith of a little girl named Miriam.” (Words and music by Pierce Pettis. copyright 1996 Polygram Music Publishing)

David Edwards’s Christmas album–“Christmas Carols Old and New” is independently released and can be ordered on Amazon.com I highly recommend it.

Note: 10% of proceeds benefits the programs of Compassion International