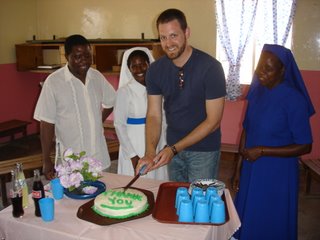 Michael asked me to share my experience visiting some of the medical clinics we assist with medicine and supplies.

We visited a district hospital near the lake today and it was hard to see the patients. They are doing their very best, but there is so little that can be done. Lots of little kids, most of them near death or dying.

One little boy, there with his granddad and mother, had an extremely bad case of malaria. His little chest would rise and fall as he struggled for each breath. There was an almost an apathy in the level of despair. Like they had seen so much death, that it was almost expected that he should die. I didn’t do so well with that. But the doctors were encouraged by our presence.

One thing I learned today was why over the counter cough syrups are so important in third world countries. If a child has pneumonia, the doctor will prescribe w/e antibiotic they can get their hands on (btw – the augmentin we delivered was a big hit!). So, while the antibiotic addresses the illness, there is no relief for the symptomatic aspects of it. The child takes the medicine, but the coughing doesn’t stop. The mother then ups the dosage of antibiotic, which helps speed up the process, but they are unable to finish a sustained course of treatment. Not only does the child not get well -but a resistance is built up for the antibiotic and then, if the child dies- a lack of trust is built in the community and the patient returns to the “traditional healer” aka ‘witch doctor’. Vicious cycle.

This also happens because people have to travel so far for health care. They come to the hospital by bike or by walking, but their child’s lympnodictumor needs to have a shot once a month for the next six months, but they are needed on the family farm. So, the first shot decreases the size of the big tumor on their face and neck, and then they are put back to work. But if they just finished the course of treatment – it is completely curable.

This is why our Food program is so important. Some of the hospitals use it as a tool to motivate parents to bring their kids for treatment each month. Come get your child her shot and you can have a box of breedlove soup.

Tonight we had dinner at the Taiwanese Medical Mission and Dr. Joseph Yu, the Director, is just and incredible man. He became a Christian as a teenager and God forever changed his life. He decided to become a doctor to heal others, but after close to2 decades of gaining prestige and position, then he felt God called his heart and he knew he had to do something to help others – so – he has been in Malawi leading the center, bringing specialists for 3 months, 6 months,and 1 year at a time. The food at the Taiwanese Mission was awesome!!! It was like being back in NYC. What a joy and treasure – especially when 70% of all Malawians do not have running water or electricity.

Tap water is such a miracle. lightswitches are such a miracle. Btw – I love Seema (sp?) It is like day old grits – you know, when it gets nice and firm so, I am doggin it down – just wish I had some eggs and bacon to go with it.