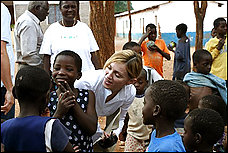 Madonna Adopts AIDS orphan in Malawi?
Her baby boy is just one in a million in Malawi!

Controversial pop superstar, Madonna, who offended Christians this last Spring when she staged a mock crucifixion during her world concert tour, declared her intention to donate a million dollars to support an Orphan Care Center in Malawi. Then she announced her desire to adopt a motherless baby boy from “Home of Hope” Orphanage run by the Presbyterian Church of Central Africa in Malawi. Now that she has custody of David Banda, she wants to build a new orphanage for some of the 800,000-1,000,000 remaining orphans and abandoned children in Malawi. Her intentions and efforts, however controversial, have succeeded in calling world attention to this tiny, Pennsylvania-size country of 12 million people in central sub-Sahara Africa.

The tragic story of David Banda, whose mother died of AIDS and whose father left him at the orphange when he was two weeks old, mirrors that of thousands of other orphans in Malwai and throughout Africa. International adoptions may help, but support for those left behind is critically important.

I returned last month from Malawi where I saw first-hand the desperate needs of AIDS orphans and vulnerable families coping with severe famine, extreme poverty and life-threatening disease. They need all the help they can get from people of good will and right motive. While I welcome celebrity involvement, including Madonna’s, I Christians and people of good will should reach out and care for orphans and abandoned children in Africa in any way they can. Not only by adoptions but by sponsoring a child within Malawi who needs nutrition, education and medical assistance, or by supporting a Malawian family that has enlarged its nuclear family unit by including orhans in its household, and/or supplying medical aid to Africa’s most vulnerable.

Personally, I favor faith-based approaches to ending poverty and AIDS because such ministries can be more holistic in addressing the needs of the body, soul and spirit. Evangelism and giving a cup of cold water and a warm meal in Jesus’ Name is the whole gospel for the whole person. That’s why I like what CitiHope is doing in northern Malawi.

If Madonna, who does not understand the true meaning of the Cross, can adopt motherless child and contribute a million dollars to help AIDS orphans in Malawi, so can those who understand both the suffering of the Savior and the power of the Resurrection, reach out and do what we can. Jesus told his disciples not to forbid the little children to come unto him. That’s why we provide daily meals and medicine to 1000+ orphans and 10,000 patients: that they might come to Him and live.