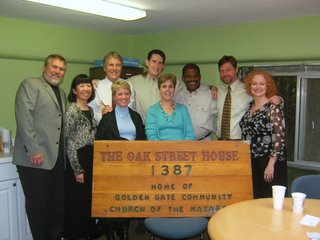 Earlier this month, I was in San Francisco celebrating my past and future ministries. On October 6, 2006, Golden Gate Community, Inc. turned 25 years old. On that same day, I signed official papers registering WorldHope Corps as a new ministry. The next day, October 7, my youngest daughter turned 14, signaling another change in our family. The following week was the 25th Anniversary alumni celebration of my graduation from Yale Divinity School where I first felt called to international relief and development work during my first trip to Haiti to deliver emergency food provisions during a famine.

As I reflected on the timing of these seemingly unrelated events–the end of one era and the beginning of a new one–in my favorite city in all the world–if felt like syncrinicity–acausal effects somehow being connected. It felt like a special moment of kairos when past, present and future time all came together as one. Past ministry and future mission meeting in the present moment. Let me try to explain:

One fine day last Spring I got an unexpected phone call from Tess Reynolds, the new CEO of Golden Gate Community, Inc., informing me that the ministry to homeless persons that I founded in San Francisco in 1981 was now 25 years old. She invited me and Rebecca to fly out to SF to receive a special tribute at the 25th Anniversary Celebration at the Westin St. Francis on October 6.

I was both shocked and delighted to hear this news. Shocked because 25 years is a long time ago and I found it hard to remember what happened in those early years of planting a church and starting a ministry in the Haight Ashbury neighborhood. And delighted to have been remembered, honored in this way, and invited to participate in an anniversary celebration of my organizational “baby” that had grown up into full maturity.

I tried to track down as many of the early Golden Gaters as I could, but was only able to reach a few. Still, it was wonderful to see former staff, community members and supporters who showed up for the event, including: Bonnie Wong, Michael Dotson, Andrew and Steve Worthington, Mike and Brenda Davis, Paul Moore, Clari and Sue Kinzler, Ira Hillyer, Ann McArtor, Cynthia Morse, Ralph Timms, Cliff and Connie McClain, Lisa Dosa, Veronica Hernandez, Susan Gamboa, Olga and Sophie, Mark and Joan Weimer, and many more. Also great to meet new Golden Gaters (who referred to us as the ‘old timers’ and ‘aging hippies’) and who were familiar with our pioneer work. One young staff member even said: “I read and memorized your book, man.”

The anniversary celebration featured a silent fund-raising auction and a program that featured testimonies from three current youth clients, a PowerPoint tribute to GGCI’s history and development, and specials tributes to three key leaders for their contributions to the ministry: Randy Newcomb (my immediate successor), Alexa Culwell (board chair) and myself as founder.

Golden Gate Community met its fund raising goal of $50,000 for the evening, and exceeded its $250,000 goal for the 25th anniversary campaign and Tribute Fund for a total of $300,000. Not bad for a ministry that once lived hand-to-mouth, month-to-month, by grace through faith, praying daily that enough donations came in from our 500 supporters to meet our $100,000/year budget. Twenty-five years later, the annual budget of GGC is 4.6 million! I guess our earlier prayers were answered.

Yes, so much has changed and many aspects of the ministry have remained the same. GGC Church and GGC mission are no longer tied together but have progressed on separate tracks, each successful in their own right. The Oak Street House in the Haight has been sold to another ministry, as was Oak Street II—our Care House for persons affected by AIDS. The new digs of GGC are in the Mission District which attracts more youth and houses the economic ventures. New staff has replaced the old timers. The mission is much more professional and mainstream. The church has grown into “one community with multiple parishes.” in the city. And pprecious lives continue to be transformed, one at a time, by God and God’s faithful people who love and help those most in need.

Amazing, isn’t it, how a little house-church of twelve folks reaching out to the homeless in the Haight grew into a multi-congregational church of two-hundred and a 4.6 million dollar social service agency with three economic ventures in the city focused on job training development for vulnerable youth by 2006?

If you look at the history of Golden Gate Community Church and see how it has evolved over the last 25 years http://www.ggcc.org/who-we-are/history/ and then look at Golden Gate Community, Inc.’s website at www.ggci.org , you get an idea of how much has changed and remained the same since 1981 in terms of the original vision and core values that we originally established.

I see the organizational DNA evidence from the early days of working with street youth, single mothers and homeless families. I am quite proud of the fact that GGC is now regarded as a premier social service agency in the city and acknowledged for its “best practices” in the non-profit world. But I also see the need for the ministry to reclaim its spiritual focus and to lift high the name of Jesus who transforms vulnerable young lives by the power of the Spirit. I’m proud to be associated with Golden Gate Community, past and present, pleased to take a bow for starting the church and mission so many years ago, and confident in its bright future.

Somehow related to all this is the promise of a new ministry focus for the future. While in San Francisco, I was invited by Joseph Lam, President of World Children’s Fund, and Paul Moore, President of CitiHope International (both of whom were present at the GGC anniversary celebration), to help start a new ministry that would mobilize professionals and lay volunteers for mission projects around the world. Together, we signed papers to register WorldHope Corps as an international relief and development organization to train and utilize volunteers in global missions, a kind of a “believers without borders” approach to ending poverty and AIDS in the world. If you are interested in helping me develop this new venture, please contact me and I’ll involve you in the ground work of this emerging enterprise.

In the meantime, my hat’s off to all who have been involved in Golden Gate Community and made the church and mission what they have been and what they are today. Here’s to the next 25 years in the City by the Bay!