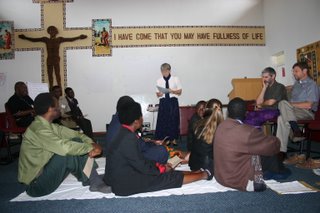 Persistent famines, pestilences, extreme poverty and civil warfare have wrecked havoc on the continent of Africa. Worldwide, 25 million persons have died of AIDS and 40 million are living with HIV disease. Sub-Sahara Africa suffers most from the AIDS pandemic where there are over 12 million AIDS orphans. If no corrective measures are taken now, it is estimated that Africa will have 20 million HIV/AIDS orphans by 2010.

Malawi, a relatively small country of 12 million, is particularly vulnerable to famine and disease, and suffers disproportionately from one of highest incidence of AIDS. Currently, AIDS infects 25%-33% of the population of Malawi, and accounts for over 85,000 deaths per year, leaving over 900,000 AIDS orphans in need of food and medical care. In spite of great efforts of large-scale AIDS awareness campaigns, what is missing is a carefully-targeted, grass-roots, faith-based, biblically-informed, theologically sound, practical approach to AIDS education and character development within the churches. Since the majority of the people in Malawi attend church, the church tends to mirror the culture, and thus a church-based behavior change intervention will significantly impact a majority of the population in northern Malawi.

During my September visit to Malawi, I was told many stories about how school-aged girls and boys who were sexually accosted on their way to school, either forcefully raped or economically pressured to trade sexual favors food and money.

Married women, too, are often victims of sexual abuse and exploitation. According to recent local government reports, “gender violence is on the increase in Malawi”. In addition to rape and predatory behavior in the community, “reported cases of domestic violence in Mzuzu have increased by over 50% this year.” (Mzuzu City Assembly reported in The Nation, April 2006).

According to a national study, “various violent acts and abuse against women by their partner put them at risk of contracting the virus that causes AIDS.” In fact, “49% of [married] women in the country have experienced some form of abuse from their partners…” In Mzuzu, a total of 796 registered cases (and countless more unreported cases) of rape, indecent assault, incest, defilement, etc. were reported to the courts. (Case Statistics on Gender Based Violence Against Women Tried at Mzuzu Magistrate Courts, 2004-2006).

Thus, a combination of economic issues, cultural beliefs, abuse and marginalization of women in the country is making more youth and married women vulnerable to the HIV and AIDS pandemic.(Crime and Justice Division of the National Statistics Office, April 2006) Clearly, standard “safe sex” education (ABC’s) falls short of what is needed in Malawi. Behavior change, character development, a new commitment to traditional values (including abstinence in singleness, monogamy in marriage and care for the afflicted), and the willingness to challenge certain cultural practices are required in this extraordinary time of AIDS pandemic.

Empowerment for women to say No, as well as confrontation and remedial interventions for males who prey upon and exploit women and children are most urgently needed. In addition to conventional AIDS education, “watchdog” confrontations and interventions are needed to stop predatory behavior and open the door to professional counseling, support groups, recovery programs and character development opportunities sponsored by the churches. Twelve-step type recovery groups, voluntary testing, and practical access to treatment programs are also needed to stop the spread of AIDS and help men and women overcome their experiences of rejection, exploitation and victimization.

Many community-based tribal leaders, Christian ministers and their spouses, church elders and members, and teachers of children and youth are ready and willing to become change agents in their communities and congregations—if specific, grass-roots, church-based training can be provided.

THIS IS WHAT CITIHOPE’S PACCT PROGRAM IS ABOUT. AND WHY I’M INVOLVED IN CHURCH-BASED AIDS EDUCATION IN AFRICA.

Our Pastoral And Congregational Care Training (PACCT)includes: frank discussions of various modes of AIDS transmission, HIV infection prevention strategies, dealing with denial and social stigma of AIDS, the need for voluntary counseling and testing, how to access medical treatment, find transportation to clinics, how to pay (if necessary) for needed medicine, and how to start, run or join recovery and support groups.

As a church-based equipping and empowerment program, PACCT is designed to train and empower 200 pastors and church leaders in Malawi to more aggressively take on high risk behavior issues in the fight against AIDS—without being moralistic. Those equipped will in turn train 50 more leaders in their churches and communities for a total of 10,000 persons equipped to help stop the spread of AIDS in Malawi.

So far we have trained and equipped 40 (mostly Presbyterian) pastors in Malawi. More trainings are needed as funding becomes available (see previous blogs.

If you are interested in learning more or helping me fund PACCT, I’d love to hear from you.