I wrote a letter today to Drew faculty and friends who have a vested interest in what happens at the historic Methodist Ocean Grove Camp Meeting Association in Ocean Grove, NJ.:

To Drew faculty and friends:

In light of this morning’s Matriculation Service on the theme of forgiveness and grace in the prophetic tradition of Hosea, I thought you might appreciate an update on the civil unions controversy in Ocean Grove–where Drew offers an annual summer DMIN course (for the last 10 years) and where I serve on the Board of Trustees.

As a vocal member with a minority opinion, I joined several others in Ocean Grove calling for hospitality, inclusion and embrace of residents of the Grove who would like to use common space for civil union ceremonies, at least in the Ocean Pavilion. Our counsel was not heeded and every attempt to introduce compromise into this heated debate was rejected.

Local protests erupted over Labor Day in Ocean Grove in response to recent actions taken by the Board of Trustees to disallow civil unions in its facilities and sue the State of New Jersey over compliance.

Dr. James Forbes of Riverside Church preached on Sunday in the Great Auditorium, as he usually does on Labor Day weekend. In his sermon, he addressed the issue of gay unions in the Grove, challenged the Camp Meetings’ position as discriminatory. According to Dr. Robert Harvey, a retired American Baptist minister who was there, “Forbes boxed the ears off the Camp Meeting Association’s stand on Gay marriage and got a big ovation when he did it. He left the pulpit and leaned down in the face of trustees and talked about the God that loves all of his children…” 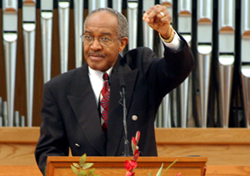 It takes a prophetic leader like James Forbes to look directly into the eyes of the religiuos leaders and trustees on the platform to remind them that “God loves everyone, including lesbians and gays” and get a standing ovation from most of the crowd in the Auditorium (over 2,000). This is the kind of leadership needed in Ocean Grove “for such a time as this.” The basic issue is whether the Ocean Pavilion on the board walk is “public accommodation” space and thus should remain open to the community for civil union ceremonies and other legal events. Or should the Camp Meeting be allowed to discriminate against couples who wish to have their relationships recognized in a civil ceremony in the Pavilion because of the Camp Meeting Trustee’s “deeply held religious beliefs” about heterosexual marriage and homosexual immorality.

The perception that Methodists ban civil unions has caused an uproar in Ocean Grove, and the issue is not going away.

Here’s the official press release from the legal team defending the Camp Meeting that sparked the protest from Ocean Grovers United:

OCEAN GROVE, N.J. – At a hearing Tuesday, the New Jersey attorney general agreed to suspend its investigation of the Ocean Grove Camp Meeting Association until a federal judge decides on two motions in the association’s lawsuit against the state. ADF attorneys represent OGCMA, which has been under investigation for declining a request to allow a “civil union” ceremony on its private property.

“Religious groups have the First Amendment right to decide what takes place on their private property without government interference. The government cannot force a private Christian organization to use its property in a way that would violate its own religious beliefs,” said ADF Senior Legal Counsel Brian Raum. “Since the attorney general has voluntarily agreed to temporarily halt the state’s investigation, the Camp Meeting Association’s rights will be respected, and nothing will happen until the judge decides on the two motions before him.”

The judge in the case, Ocean Grove Camp Meeting Association v. Vespa-Papaleo, is currently considering a motion for preliminary injunction filed by ADF attorneys and a motion to dismiss filed by the state of New Jersey. If the court grants the motion for preliminary injunction, the state’s investigation would be halted for the entire duration of the lawsuit, which was filed on Aug. 11 (www.telladf.org/news/story.aspx?cid=4206).

ADF is a legal alliance defending the right to hear and speak the Truth through strategy, training, funding, and litigation.