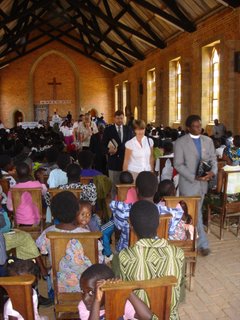 I preached today at the Livingstonia Mission Church–named after Dr. David Livingstone, the famous Scottish explorer, educator and medical missionary to Central Africa in the mid 19th Century who exposed the slave trade which led to its demise. Livingstone is remembered today as bringing the 3 C’s to Central Africa: Christianity, Commerce and Civilization through colonialism.

The Livingstonia mission station itself was established by his successor–Dr. Robert Laws–who spent 53 years as a medical missionary and developed what is now the Central Church of Africa–Presbyterian. Today, there are over 130 churches with multiple ministries of holistic Christian care as part of the Presbyterian Synod of Livingstonia.

It was Dr. Laws who built a mission campus on the plateau overlooking Lake Malawi that became known as the “greatest achievement in Central Africa.” Today, the compound includes the mother church, primary and secondary schools, a hospital, teachers residences including Dr. Law’s Stone House, woodcutting factory and store, and Livingstonia University with teacher’s college, agriculture, and seminary. It sits ontop of a mountain plateau, too high for misquitos. Still, Malari is number two disease, second only to HIV/AIDS.

David Gordon Hospital in Livingstonia is part of the original mission station, established in 1975. Currently, the hospital is in need of various medicines and

Livingstonia has a population of 70,000 and 7k we’re told by the doctors, are HIV positive. The hospital we toured serves over 8K patients each year, 75% of whom have AIDS. The whole country seems to be HIV positive, and it permeates the church and culture. Thank God the Anti-Retro Viral drugs are available and with this treatment AIDS becomes a chronic but manageable disease.

What a privilege to preach to 700 or so congregates who filled up the splendid sanctuary. My text was John 4–the stimatized Samarian woman at the well… The music of the 5 choirs, mostly young people, was incredibly good. Perfect pitch, rhythm and movements. Distinctively African. Well practiced. Brought tears to my eyes. Although the service was two hours long, it did not seem that way. It was well-organized and wonderfully-conducted. I kept wishing my family were here to experience worship at its best.

We had dinner at Dr. Andy Gaston’s home, and along with the feast at the Taiwan
Medical Mission, it was the best food I’ve had since coming to Malawi 10 days ago. All my other meals were the same: lean chicken, greasy fries, spinach greens. Breakfast eggs are always cold. Beef is tough which i never get. I mostly eat french fries, greens and protein bars.

We swam in Lake Malawi. Very fresh, clear, warm water. Refreshing. Fun in the sun, no summer beach crowds, simply wonderful. Paul and I wanted to return just to hang out on the beach where the rooms go for $12/night! Its a favorite place for drifters, backpackers, expats on holiday, and the young at heart. No tourists, than God.